is an electronic journal which focuses on developmental questions in Somalia, Djibouti, Eritrea, Ethiopia, Sudan and South Sudan. It is published by the Finnish Somalia Network. The articles and other materials are based both on research and practical work. Horn of Africa Journal is trilingual (Finnish, Swedish, English) and it is issued twice a year.

Somali and Finnish NGOs join forces to combat the biggest environmental threat in Africa, desertification. A joint project called ‘Sahansaho – against desertification in Somalia’ started in the beginning of the year 2012 by the funding provided by the Ministry for Foreign Affairs of Finland.

The project operates at three sites in Northern and Central Somalia: Adado in the Galgaduud region, Galkaacyo in the Mudug region and Buhodle in the Cayn region. At each project site, a local NGO is responsible for the implementation of the project activities. Furthermore, it is closely connected to its respective partner in Finland as well as the Finnish Somalia Network. Moreover, the three organizations in Somalia are expected to develop close mutual working relationships which will support, for example, the implementation, information sharing, learning of good project practices and monitoring. So, in total seven organizations are involved in a new type of a development project, where cooperation is seen as a key to effective, transparent and empowering process.

In the first year of the project, the main activities comprise of a baseline study to be conducted in the project areas in Somalia, beginning of the construction work for planned environmental protection centers, and experimental tree planting. At the time of the publication of this journal issue, the baseline study is currently being carried out. The study has been planned and it is conducted in cooperation with the Viikki Tropical Resources Institute (VITRI) at the University of Helsinki and the World Agroforestry Center (ICRAF). The researcher in charge is a doctoral student from VITRI. As a result of socio-economic and field surveys, necessary information regarding, for example, the tree species which are ecologically adaptable, socially acceptable and economically viable will be produced.

“Local community, particularly the older generation, has been enthusiastic about the project. Elderly people still remember how the environment used to look like here, and they have recalled names of the trees that are about to disappear. We have also been surprised that despite long periods of drought and cutting off trees, we have also seen real forests which are home for endangered species of trees and animals. Yesterday we even saw a herd of some 1000 monkeys! It would be a real victory if we could help people to understand the value of these forests that are still left”, reported by phone Abdulkadir Mohamed Abdi, who is the coordinator representing SSHDA, and assisted in the field study in Buhodle. 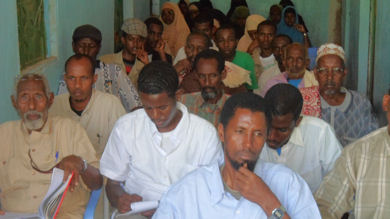 In Buhodle, a seminar to inform the local community about the Sahansaho project was organized in the end of April. Around 80 participants listened attentively.

In the first week of May, all the project partners from both Finland and Somalia will meet in Galkaacyo, where HRRO will host the meeting. In addition to environmental training, project administration routines, construction plans and other future activities will be thoroughly discussed. Awareness raising regarding problems of cutting the trees for charcoal and promoting the use of alternative energy sources will be key elements in the project, in addition to extensive tree planting.

Sahansaho is a pilot project at least in two important ways. Firstly, a new administrative model, based on collaboration between several actors is being created. This kind of a joint project model is expected to improve effective implementation of future projects and the capacity of small NGOs, and also result in better outcomes. Secondly, Sahansaho is the first large environmental project in Somalia funded by the Foreign Ministry, and therefore, the project, including outcomes of the current baseline study, will provide important firsthand knowledge and experience on environmental conditions in Somalia. Thus, Sahansaho Project may serve as a stepping-stone for a more comprehensive environmental cooperation between Somalia and Finland in the future.

This email address is being protected from spambots. You need JavaScript enabled to view it.